pop over to this web-site New York City, oh how I’ve missed you!

See you later New York! I am so proud of myself for sticking with it when the race got rough to get my PR. I can’t wait to run through NYC again. #UnitedNYCHalf @nyrr #medalmonday #mondaymotivation #newyorkcity #oisellevolée #pr #running #werunsocial #runchat #nyc #instarunner #halfmarathon #runnergirl

I decided to put my name into the NYC Half lottery for work in October. I have a startup that counts running shoes and apparel during major races. I didn’t think I would get in and sure enough I did! This was my goal race to try to break 2:00. Well ok the far A goal was to break 2:00 and the B goal was 2:05. Let’s just say it was a pretty eventful race.

My trip to New York started off rocky. After the flights from hell. Yes, my first flight was an hour-ish late and then United ‘lost’ my airplane from DC to Newark. I ended up arriving at 2am. My uncle graciously picked me up and then I took the train into the city the next morning.

The packet pickup was super-efficient. I walked in and all of the United NYC Half branding was up which was fun. Handed over my race sheet got my bib and shirt and was ready to go! I waited for my dad and his friend to get their bibs saw them then went on my way to explore the city.

Bib picked up and ready to go for #UnitedNYCHalf! Now I need to hope it’s not snowing on Sunday #oisellevolée #runchat #nychalf #running #oiselleteam #oisellewa

Since I had extra time in the city, I got to catch up with a bunch of my good friends from college, saw tons of art, went for a shakeout run in Central Park, and even saw the NCAA Wrestling finals at Madison Square Garden! It was a pretty jammed pack weekend.

Race day morning was pretty interesting. It was a lovely freezing 32 degrees. My dad met me at my hotel at 5:30am and then we walked to the gear check at the south end of Central Park. It was so cold and windy. I’ve been in cold weather before but man it was cold. After dropping my stuff off I said goodbye to my dad, he was in a later corral, and then went through security.

It’s too cold but the sunrise is worth it! 13.1 or bust! #UnitedNYCHalf #running #runchat #newyorkcity #sunrise #nyc #oisellevolée #oiselleteam

The walk to the corrals was pretty uneventful just long and cold. I did see a pack of elite runners warming up which was crazy. They were bundled but I had a feeling they would be running in half of the clothes I was wearing. I found my corral quickly and huddled with a few other runners until the corrals closed. The start was super organized and it wasn’t too crowded.

I got to Time’s Square and there were tons of people cheering in the freezing cold. It was amazing! I was feeling great at mile 7 as I made the turn on to 42nd Street. Less than a second later and description BAM– I fell in a pothole and then someone tripped over me in the middle of the course. Yes, ladies and gentlemen, I fell in a pothole. All I remember is running and then hitting the deck. I was lucky that a person behind me stopped and helped me get up and I continued to run. It was so cold and I was so shocked that I had no clue that I was bleeding and in a massive amount of pain in until a Mile 9. My dream of 2:05 was ended, just like that.

The last five miles of the course are on the West Side Highway and it’s a pretty long and windy stretch of the race. I knew I needed a new game plan. I walked slowly through the water stop at mile 9ish and realized that yes, my knee was heavily bleeding, (thankfully my Oiselle Moto Lesley tights didn’t rip!), and I had shooting pain in my right hip and IT band. Since there were a few spectators out there and I didn’t want to look like a quitter, I decided the only way to finish the race was to run/walk.

That’s what I did, run/walk about a minute on minute off. I head more strange comments of support than ever before. Things like- “Hey you’re almost there stop walking” and “Oh sh*t, she fell!”. Thanks New York, I really needed that.

I finally made it to the tunnel and my watch decided to freak out. I then realized that I would PR even though I completely failed the last six miles of the race. I looked like a mess, I was sprinting and crying around that last turn and across the finish line. My finish photo is me with my hands over my face. I was greeted by a high-five from Peter Ciaccia, NYRR’s President. In all of the chaos I really didn’t know what was going. I somehow got my finisher medal around my neck, managed to take a photo with the NYRR backdrop, and got all of my finisher food before I got to the medical tent. The doctor who cleaned me up said I was lucky that I didn’t bruise my hands, arms or shoulders when I fell and that I finished without hypothermia (there were a lot hypothermia cases this year because of the cold) cleaned me up and sent me on my way.

Hello shiny new half marathon PR!!!! I did wipeout at mile 8 but I got my PR! My @oiselle moto tights didn’t rip. To top of off I got a finish line high-5 from the CEO of @NYRR! #UnitedNYCHalf #oisellevolée #oiselleteam #newyorkcity #runchat #running #flystyle

As I waited for my dad to finish I realized that I did bruise my right hand and that something wasn’t right in my right leg. But staying warm was the most important part so I wrapped myself in space blankets and my extra clothes and waited. Once I found my dad we hopped in a cab and back to the hotel then saw a few friends for brunch.

I am very proud of myself for toughing it out and finishing the race. I don’t think the fall tarnished my PR, if anything it makes me want to race the NYC Half again and get that sub 2:00. If you ever get a chance to run a NYRR race do it! They do a great job organizing and putting on an un-forgetful experience. 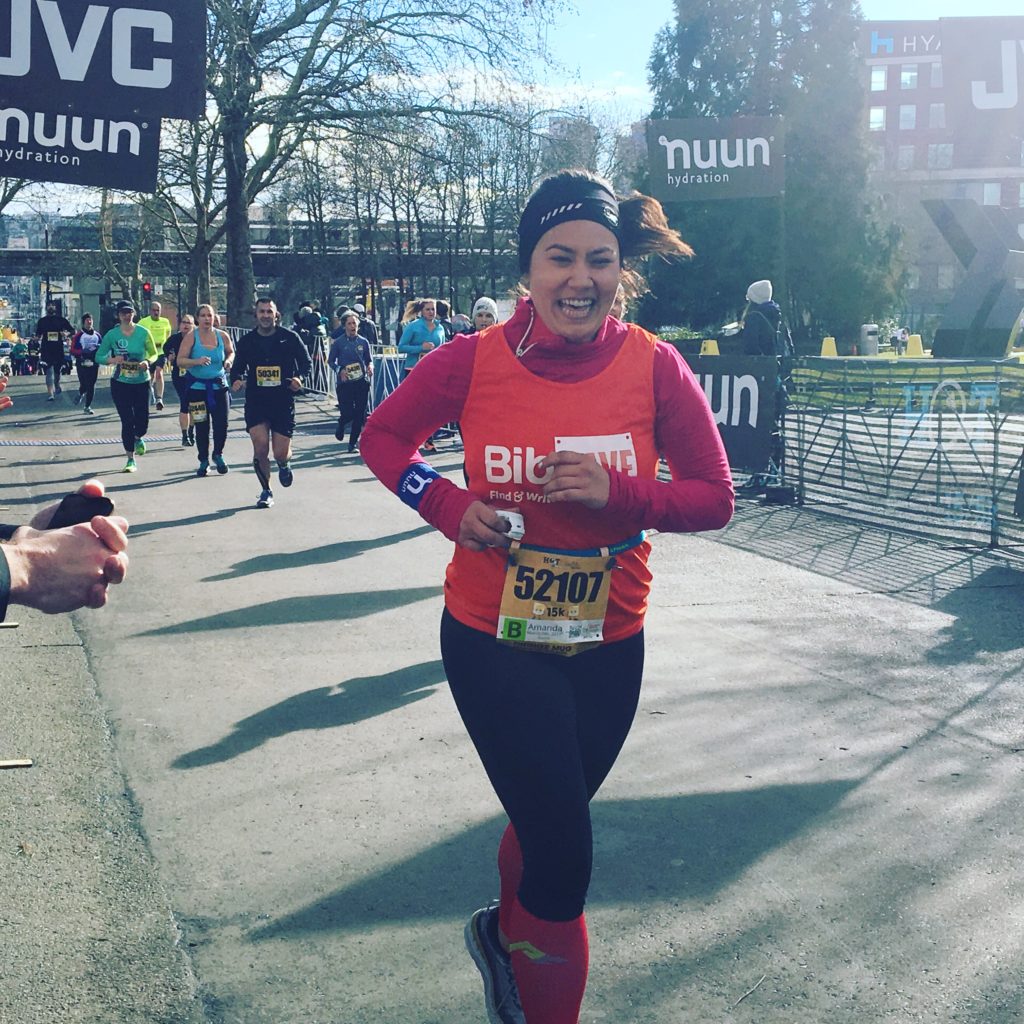