I’m part of the lululemon collective and will receive a commission if you make a purchase through the links below.

The pandemic may have changed our daily lives but it doesn’t mean it should ruin the holiday spirit and gift giving.

Now that I am completely work from home, I noticed not only has my exercise routine changed but what I wear has too! Here are my best picks for the pandemic athlete from lululemon.

These pants are my new go to for everything from at home yoga to wear all day as I work. I own at least five pairs of these and honestly, they are not only soft and comfortable, they last forever. I do size down on these – I normally wear a size 10 in all lululemon tights and pants but in the Align Pant II I wear a size 8.

There are no words to describe how much I love this longsleeve. I wear it running, walking my dog, and even out running errands. This is the perfect piece for the person in your life who started running during the pandemic. The thumbholes and Cuffins™ keep your hands nice and warm.

This half zip is my boyfriend’s favorite. He wears it to run, lift, and even to work. The longsleeve is lightweight and sweat wicking which makes it perfect for layering or for someone who run warm while working out.

Yes, these are men’s glove but honestly, they are for everyone. Not only are they a snug fit, they are perfect for everyone who’s been out walking or running to pass the time during the pandemic. They even have tech-friendly fingers so you can use your phone while you’re out and about. 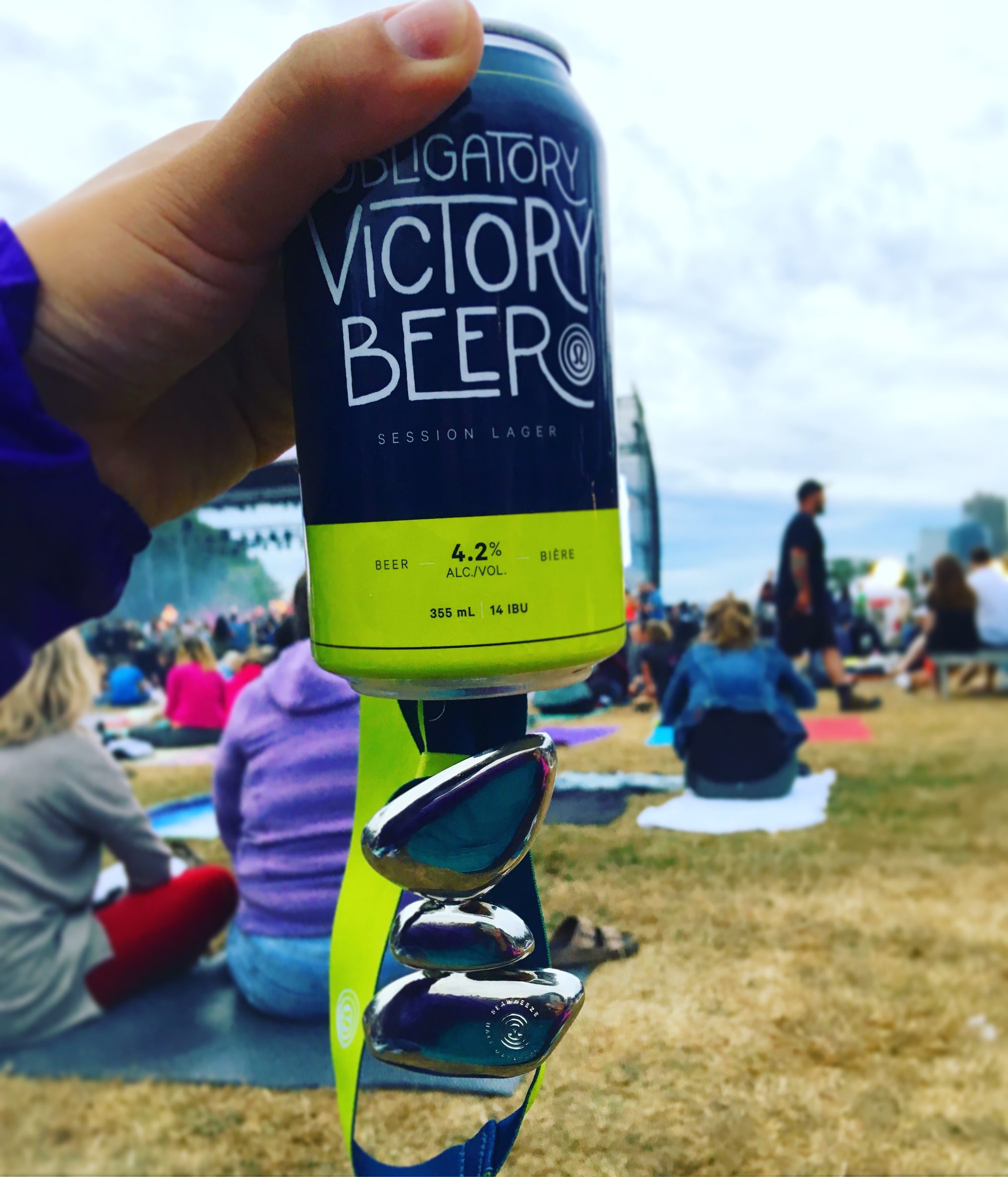 Oh my gosh, Seawheeze was amazing! This was my first time attending and it did not disappoint!

I drove up on Thursday and went straight to my hotel to check in. The border took 2o minutes and the traffic into Vancouver was not bad at all! I quickly changed into my running gear and went over to the Kitsilano neighborhood to explore. I went to the original Lululemon and bought a sweet Kitsilano tank! I was able to get a Seawheeze reusable bag which are BEAUTIFUL this year. I then met up with my fellow BibRave Pro Jeannie and we went on a group run with Frontrunners. The smog was bad so I had to apologize for running so slow and hacking up a lung. But the view at the end of the beach was beautiful and it was wonderful to see Jeannie again!

I headed back to my hotel and took a nap before meeting my friends in line at the showcase store. We were there by 1:30am and the line wasn’t too bad. But as the night went out the line got longer and louder so sleep didn’t really happen. I was able to find a 24 hour Tim Hortons at 4am which saved us. Lululemon had a bunch of stilt performers walking by the line which were super cool. I would say we ended up in the first 300-400 people in the showcase! The showcase store was laid out in a strange way. The reflective clothes I really wanted were in the middle of the showcase and the line for them kept growing. By the time I was in the roped part of the line there was nothing left which was a bummer. We kept searching and I was able to find a few things but there were not a lot of size 10 or 12 shorts. I was disappointed because I wanted speed but there were not a lot of prints left just solid colors. I ended up with two pairs of tights, a cropped cool racer back and a pair of tracker shorts. I found a pair of tights and a skirt for my mom too. After checking out we went to packet pickup which was pretty quick. We got a spike bag, tube of nuun, a coupon for a free JJ Bean coffee, and a water bottle. The nice part of Seawheeze is there are no bibs! All you have to do is put a timing chip on your shoe. Personally, it makes life easier for me and I don’t have to worry that my bib is not on straight in the morning.

We then checked out the Prerace Party and there was so much to do! There were free tattoos, free water, a bunch of cool booths like Nuun and Vega who were offering samples. I volunteered to meet with the Lululemon design team and run on a treadmill then answer a few questions about my sports bra. I learned a lot about sports bras and what goes into the design process. They even gave me a free set of mala beads!

I headed back to my hotel napped and worked for a bit then met up with a bunch of Oiselle Volee for dinner. I also had a chance to explore some cool art near Gastown and found this awesome alley.

The race was pretty easy for me to get to. I met up with Jeannie in front of my hotel and we walked over together. We found a bunch of our fellow BibRave Pros, Mai and Bradley, for a pre-race photo and I met up with a bunch of Oiselle Volee for a team photo too! I headed to the corrals with Bradley and Jeannie and we somehow ended up close to the front. Seawheeze is self seeding so we were far ahead of most people. My overall goal for the race was to finish since I was coming off of a sprained ankle and did not want to re-injure the pulled tendons. The start was quite quick and we started running through Gastown and Chinatown. Head up, wings out!

In the first few kilometers there was a spin class on the overpass cheering runners on for about 100 meters. It was a huge rush of energy and was super fun to cheer them on as they were riding. There were a bunch of random number 5s hanging from the overpass and I am not quite sure why. It threw me off a bit since I knew we were not 3 miles/5 kilometers in. The course quickly took off toward the Seawall and then to the Burrard Street bridge. There was a lot of entertainment which made the Seawall a lot more interesting. The bridge was hard but there was so much going on that I forgot about the long hill. The cool part of the bridge is we passed Lululemon HQ! There were a lot of people cheering as we got off the bridge and onto the last part of the course. The Seawall was beautiful and narrow. I had a to walk a few times because of the heat and it was so hard to stay out of the way. A lot of people were not considerate of others which made it frustrating. The north part of Stanley Park is just beautiful. So much to see and thankfully the smog had cleared a bit too! Lululemon put a lot of entertainment- a retro DJ with dancing inflatable fish, a bunch of hippy Canadian, people on SUPS cowbelling, mermaids, Firemen and Police men with squirt-guns, and the Vega Hydration stop with a huge misting station. The last mile of the race was partly shaded which was so nice! I ended up catching a few of my friends at the end which made the last part much more fun. I did not run this for time and I am glad I did. I had a lot of fun taking in the view and enjoying the on course entertainment. The finish chute was crowded. We ended up waiting in line for almost 40 min to reach the front of the runners brunch. In line we got our beautiful finisher’s medal which triples as a bottle open, statue and medal (!!), finisher’s sunglasses, water, a Vega protein bar and a cooling cloth. The Breakfast was great even though I heard people were made there weren’t waffles. Lululemon even had a special dairy and partially soy-free brunch box which made it even better! After exiting Saje gave away free runner’s reward samples. I hung around and waited for my friends to finish then headed over to the Nuun at Nuun Ambassador meet-up. The sunset festival was cool. There was free yoga that I missed due to dinner which is ok. I poked around the merchandise and didn’t see anything I liked. However, the Obligatory Victory Beer was pretty good and it wasn’t super expensive. We found a spot in front of the stage and listened to Cold War Kids and Young the Giant for a bit. This was a great way to finish a fun filled weekend. Overall, I really enjoyed Seawheeze and the weekend festivities. Lululemon did a great job informing us about the weather and all other event related activities without being annoying. Their social media was on point- I got so many likes and replies it really meant a lot to see a brand interact with to many of their fans on a regular basis from registration to race day. I also loved all of the positivity throughout the weekend. It wasn’t about winning the race it was about experiencing the half marathon and staying in the now. I will definitely run this race again. It is pricey but you do get a pair of $58-$65 CAD running shorts and plenty of race day swag and food. Next year’s race is in September which makes it much nicer running weather. I didn’t pay too much for transportation since I drove up and will probably do that as well.

Thanks for a wonderful weekend Lululemon! I can’t wait to do it again!